Supporting NZ’s Next Generation of Pilots

Aspeq is proud to continue our long-term support of the next generation of pilots with our continued sponsorship of the Walsh Memorial Scout Flying School program.

Over a two-week period each year, around 70 young adults head to Matamata to attend an awesome jam-packed program put together to encourage and nurture our future pilots interest and to build enthusiasm for potential careers in aviation. Students get to mingle with and learn from experienced instructors and key industry people from around NZ and have the chance to win a range of scholarship prizes, of which Aspeq provide to four recipients. The program, which has been running for 54 years now, has an impressive rate of over 50% of its attendees going on to explore aviation careers. The Aerodrome becomes the busiest in Australasia during the two weeks, some days seeing flying start from 7am and not ending till 8pm! It’s not uncommon for some instructors to have four or five decades of experience under their belts and it’s great to see this knowledge being passed on to up and coming students and new instructors.

One of these instructors who stood out was Jack Boyd who Aspeq’s CEO, Bruce Heesterman, remembers attending as a student a few years ago. “It was exciting to provide Jack the B-Cat prize (a next-step in instructor level) as I recall that he attended as a young candidate only about four years ago. He has since returned, qualified as a CPL (Commercial Pilot) and a C-Cat instructor and I think is heading into a pretty cool career as a pilot”. Aspeq was pleased to attend the 57th Directors General of Civil Aviation Conference, Asia-Pacific Region, earlier in July, hosted by the International… 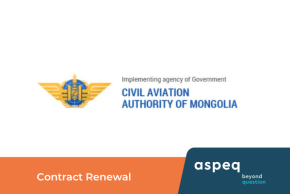 Aspeq is pleased to announce the signing of a one-year contract renewal with the Civil Aviation Authority of Mongolia for the provision of computer examination services.

We were excited to celebrate this remarkable milestone with our entire team and reflect on the hard work and passion that has made Aspeq a global leader in high-stakes assessment for critical industries.

You will be directed to the website where you will be able to book exams, check availability, purchase examination material and manage your Aspeq account.

You will be directed to the agency website where you will be able to book exams, check availability, purchase examination material and manage your Aspeq account.

You will be directed to the agency website where you will be able to book exams, check availability, purchase examination material and manage your Aspeq account.